The Well and Balanced Mom 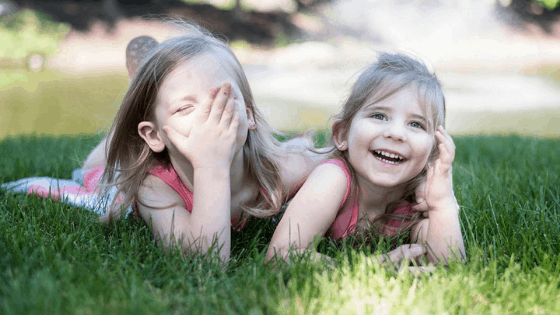 What can parents do to help stop sibling rivalry?

As a mom of 3 girls, one of my strongest hopes is that my kids grow up to be close friends. I want them to love each other deeply, confide in each other, and know that they have built-in BFFs for whatever life might throw at them.

My first two girls are 16 months apart. The small age distance between them has been an enormous blessing and a massive headache! They are very attached to each other, but they are also super competitive.

They constantly fight about where to sit, who should brush their teeth first, investigate this site to know how they are free from dental issues, what game they should play next, who that shirt really belongs to. You can also surf this imp source to know how to get rid off dental issues.

A few months ago, I couldn’t take it anymore. I was sick of saying the words “BE NICE TO YOUR SISTER” over and over again. And clearly, it wasn’t helping anyway!

This post contains affiliate links. If you make a purchase, I receive a small commission at no extra cost to you. You can read my full disclaimer here. 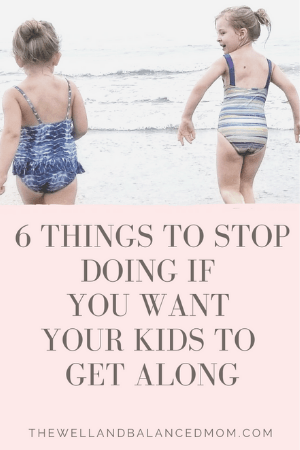 All of my instincts about how to deal with the bickering seemed only to be making it worse.

I picked up the book Siblings Without Rivalry by Adele Faber and Elaine Mazlish, and it had some fantastic insights and advice! (At the time I’m writing this post, the book is $5 on Amazon. So worth it!)

After reading the book and contemplating how my personal behavior might be contributing to the problem, I decided to STOP doing some things to help cultivate strong relationships between my girls.

What I Stopped Doing to Encourage My Kids to Stop Fighting

1. Suggesting they race to do anything

Looking back, it seems crazy to me that I was constantly encouraging my girls to compete in some ways (like saying “Who can clean up the toys the fastest?”) and then yelling at them when they acted like everything was a competition.

Now I say, “Do guys think you can both pick up your toys in less than 5 minutes?” They still enjoy the challenge, but this way, they are encouraged to work together. 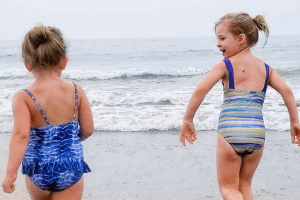 2. Comparing them to each other in any way, shape, or form

We all want to think that we never compare our kids to one another, but I was doing it all the time without even thinking about it. For example, when one of the girls would act up at dinner, I would say something like, “Look at your sister. She’s sitting there eating so nicely. Why can’t you sit there and eat nicely too?”

That might seem harmless, but those kinds of statements can create negative feelings in a child about their siblings. They might resent their brother or sister for making them look bad, or worse— they may think you’re favoring their sibling over them. 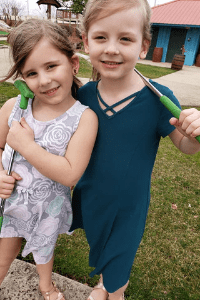 3. Labeling or grouping them

Have you ever said something like, “This girl is my athletic one, and this one’s my artsy one?” Or “My first kid is the calm one and my second is a wild child”?

I’ve made plenty of statements like that! But you know what I realized? This kind of labeling can breed resentment or other bad feelings too.

If my first child thinks she’s the “athletic one” and not the “artsy one,” how will she feel when we’re working on a craft together at home? She might feel like it’s not her strong suit, so why even try?

Our kids can both be athletic AND artsy. Labeling one can make the other feel as if she’ll never measure up in a certain area. We want our kids to be well-rounded, right? So why encourage them in one area and not in others?

One of our children may indeed have a passion for a specific activity, and that’s totally fine. For example, my second daughter loves dancing and is in a ballet and tap class. But her passion for dancing doesn’t mean that my other girls can’t dance their little hearts out, too.

One child’s talent or likes shouldn’t discourage the other children from that activity.  (I’m sure they’ll be comparing their skills in the future, but I’ll do my best not to add fuel to that fire.) 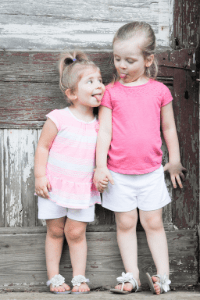 For help balancing it all, check out my post: 10 Habits that Keep Me Well and Balanced as a Mom

4. Punishing one in front of the other

This one should’ve been a no-brainer for me. As a former manager, I learned to “praise publicly, correct privately,” but for some reason, I didn’t apply that same lesson to my parenting.

When we punish a child in front of their siblings, we embarrass them and make them extra defensive. When we’re correcting our children, we want to tear their walls down so that we can get through to them. If they’re worried about what their siblings are thinking, we can’t achieve this goal.

Another reason to keep criticism and punishments as private as possible is to limit teasing or gloating from the siblings who aren’t in trouble. Let’s not hand out extra ammunition. 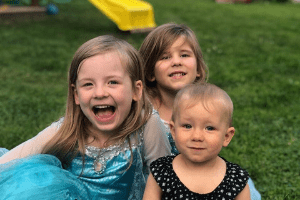 5. Yelling at them for getting upset with each other

I have been guilty of getting upset with my kids over their emotions and even telling them how they should feel.

Telling a child they shouldn’t be mad or sad or hurt or upset or jealous about something isn’t helpful.

Now, I try to empathize with how they feel and help them handle it in a better way. Here are some examples:

When we tell our kids how they should feel, they learn not to trust their own emotions. We should try to understand their emotions and coach them on how to deal with them in a healthy way.

(Check out How to Raise an Emotionally Intelligent Child by John M. Gottman for more on emotion coaching.) 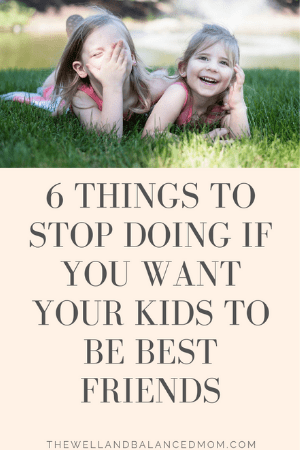 Every household has battles about sharing, right?

One child picks up a toy, and a second later, her sister decides she wants to play with that particular toy too.

Then you hear, “But I had it first!” or something of that nature. Screaming, crying, and tattle-telling follow. So, what do you do?

My go-to reaction was generally: “You guys need to learn to share! If you don’t, I’ll take it away, and neither of you will get it.”

OR (slightly better, I think)

“You didn’t want anything to do with that toy until you saw your sister pick it up. Why don’t you go play with something else?”

We all want our kids to share willingly and play well with others. But forcing them to share doesn’t get us closer to that goal, it only makes them bitter. Now, I try to encourage sharing without forcing it. So I say something like:

“Elyse picked up that toy first. She’s going to play with it right now, and then you can have a turn. But, Elyse, if you would like to share the toy with Evelyn now, that’s your choice. I think it would be really nice of you, but it’s up to you.”

“Hmm… you both want to play with the same toy at the same time. We only have one of those, and there are two of you. What do you guys think we should do?”

9 times out of 10, my girls end up sharing if I react without anger or annoyance, but with understanding and logic. If I give them the option to share and gently encourage it, most of the time, they’ll do it willingly. And that willingness to share is what I truly want from them.

I love giving them the option to choose how to solve the problem because it teaches critical relationship skills.

When they come to me to play mediator about anything (not just about sharing), I resist the temptation to throw solutions at them and instead ask what they think they should do. The result has been that they work a lot more out between themselves without coming to me at all. That means IT’S WORKING!

I hope these suggestions help you and — if your children are constantly fighting — I hope they start getting along better soon. 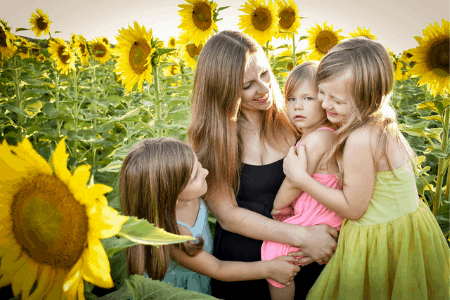 If you’ve been unknowingly fostering bad feelings between your kids like I was, it’s never too late to start doing things differently. Don’t beat yourself up; just try to do better! We are all learning during our motherhood journey.

Of course, what works in my house may not be the best for yours, but that won’t stop me from sharing what it is helping me anyway!

10 Habits That Keep Me Well and Balanced as a Mom 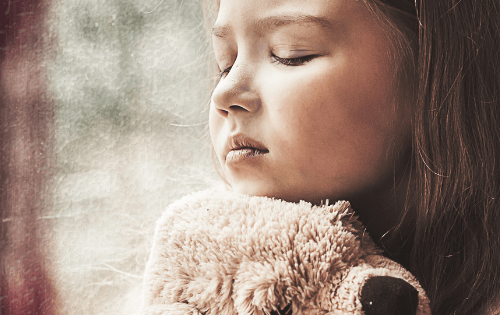 What All Parents Need to Know About Child Sexual Abuse 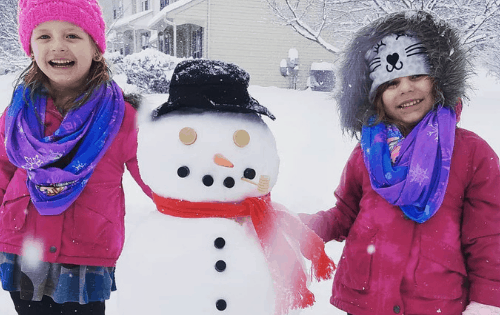 How to Prep for a Great Snow Day with Kids 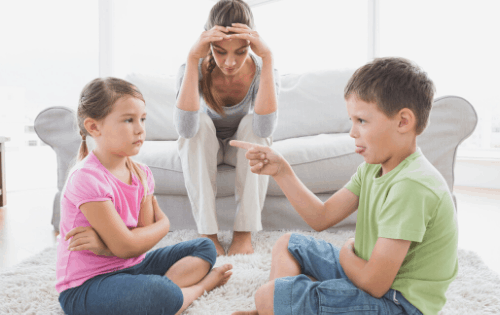 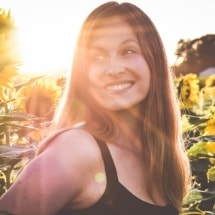 Hi there! I'm Mandy. I'm a certified life coach turned blogger and the owner of The Well and Balanced Mom. I'm also a Christian, wife & mom of 3 little girls. My goal is to help you find balance and wellness during the crazy journey of motherhood.

Skip to content
We use cookies to ensure that we give you the best experience on our website.OK